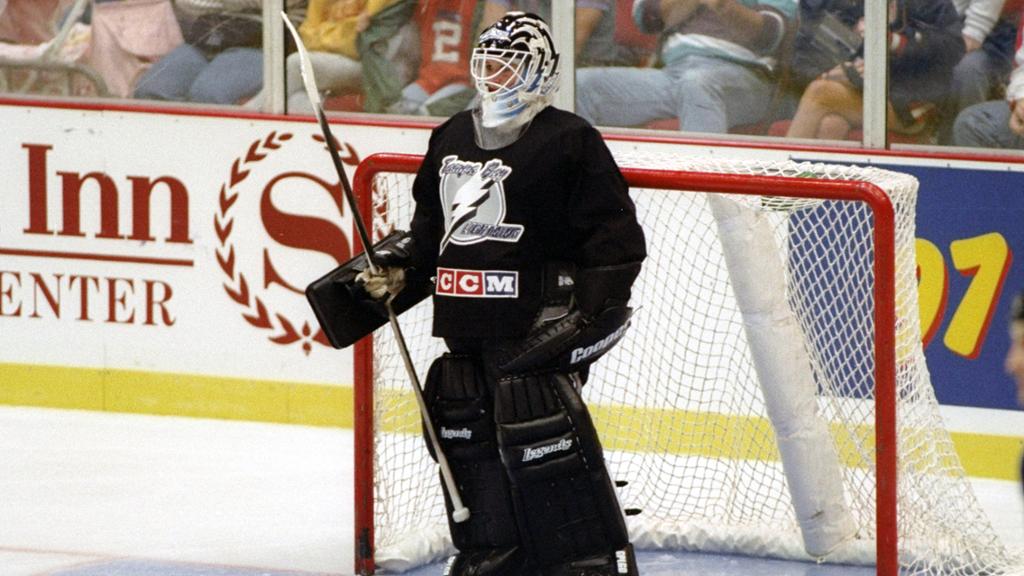 NHL.com's Q&A feature called "Five Questions With ..." runs every Tuesday. We talk to key figures in the game and ask them questions to gain insight into their lives, careers and the latest news.

The latest edition features Manon Rheaume, the trailblazing goalie who broke hockey's gender barrier from peewee through the NHL. Rheaume was the first female to participate in the prestigious Quebec International Peewee Tournament, which changed its rules to allow her participation in 1984. She went on to become the first woman to play in the Quebec Major Junior Hockey League (in 1991) and is the first and only woman to play in the NHL.

On Sept. 23, 1992, Rheaume made hockey history when she played the first period of the Tampa Bay Lightning's preseason game against the St. Louis Blues; she also played one period the following year in a preseason game against the Boston Bruins. Rheaume also played 25 games for teams in the ECHL, West Coast Hockey League and International Hockey League.

The 48-year-old remains the only woman to play a game in any of the four North American major sports leagues -- NHL, Major League Baseball, the NBA and NFL. As a goalie with Canada's national women's team, she was a silver medalist at the 1998 Nagano Olympics and helped Canada finish first at the IIHF Women's World Championship in 1992 and 1994.

Manon Rheaume grew up in an athletic family in Lac Beauport, 15 miles north of Quebec City, the middle child of Pierre and Nicole Rheaume, breaking barriers at almost every turn. With Pierre coaching minor hockey in the community, she and her brothers, Martin and Pascal, practically lived in arenas; Pascal wound up playing 318 NHL games for six teams between 1996-97 and 2005-06, winning the Stanley Cup with the New Jersey Devils in 2003.

These days, Rheaume is a public speaker, makes a weekly hockey appearance on RDS, a French-language television network, and is coordinator of the Detroit Red Wings' Little Caesars female hockey program, coaching the under-12 team as part of her involvement.

When she's not busy with that, Rheaume is an active hockey mom. Her elder son, Dylan St. Cyr, a 21-year-old goalie, is a senior at Notre Dame, and younger son Dakoda, who turns 14 in December, is a defenseman in Bantam Triple-A in Michigan.

Her life story was published in October for young readers in "Breaking The Ice," written by Angie Bullaro and illustrated by C.F. Payne. A feature film, "Between The Pipes," is in the works, with Bullaro set to play the role of Rheaume. Production is scheduled to begin next summer, depending on the realities of the coronavirus.

Rheaume said she is proud that the new book transcends her sport.

"I think the message is for anyone to follow their dream," she said. "If you're passionate about something, if you work really hard, you can accomplish anything you put your mind to. The other message is that you don't need to fit a mold to do something you really like. I was probably the total opposite of what an NHL goalie should look like -- my size, my gender -- but I got the opportunity. I didn't let anything stop me from doing what I loved most. I was given the opportunity to challenge myself at the highest level and I went for it."

It's probably safe to assume that Rheaume, who spoke with NHL.com on Monday morning while rushing between a meeting and preparation for her RDS appearance that evening, is busier now than when she was playing goal. She joked that having lived in in the United States for the past 28 years, she does nothing in English after noon on Mondays "so my brain can switch to French for RDS. It's not easy."

"I'm probably busier now than I've ever been," she said. "That my sons are older means they don't need mom as much now as they used to. The last few years, I was focusing on them, saying no to a lot of projects because I wanted to be there for them.

"That's what my parents did with me and my brothers and that's one of the reasons why Pascal and I had some success in hockey -- our parents never missed anything of our hockey when we were younger. Now that I have a son in college and one who's going to be 14 in December, I'm like, 'OK, what's next?' "

Plenty, as it turns out.

How difficult is it for a former goalie to watch her son in net?

"It's horrible (laughs). Well, maybe not horrible, but very stressful. Dylan was maybe 11 years old, going to his first big state final, and I remember waking up in the morning with butterflies in my stomach. I called Mom and said, 'Is this normal, to wake up with butterflies before Dylan's big game?' and she said to me, 'It's payback time.' First, I realized that I was normal. And then I said to my mom, 'I want to thank you for everything you did. I can't believe I put you through all this for all those years.' As a goalie, my favorite thing was to be under pressure. That's why I loved the position so much; you're under so much stress, and you know you can make a difference if you play a great game. You're a hero or a zero. That feeling, as a goalie, I absolutely loved. But when my son started playing that position, I quickly realized that I can't control his preparation or how he's going to do or anything on the ice -- but I hear all the comments from people in the stands. You know the game and the position, and as a mom, it's hard."

It took 'your' Tampa Bay Lightning a few years to win the Stanley Cup for the second time, having won in 2004 and now again in 2020. What are your thoughts about their championship?

"I watched all of it. After being locked down for months by the virus and not being at the rink … well, my life has been at the rink. I grew up with two brothers who played hockey, my father was a coach and I think we were at the rink six or seven days a week. Now I have two boys who play and I'm coaching a girls team and oversee a girls program, so that's what I do. Finally having the chance to see hockey on TV was great. Tampa Bay had everything it needed to win the Stanley Cup. They had it the year before, but they were upset in the first round (the Lightning were swept by the Columbus Blue Jackets in the Eastern Conference First Round). They had players who could put the puck in the net, great defense and Andrei Vasilevskiy, who's been amazing in goal. And to see where that team came from -- in 1992, when I went to training camp, they didn't even have an arena and people in Tampa Bay didn't know hockey. What they've done with the team, their arena, things they've done in the community and the knowledge of the game that fans have now, it's amazing."

What is your favorite souvenir of your experience with the Lightning, and your most cherished memory?

"The souvenir would be the letter that (then-Tampa Bay general manager) Phil Esposito sent me in 1992, inviting me to training camp. I was working for RDS at the NHL Draft at the Montreal Forum that year, a summer job (following her first of two championships with Canada at the world championship). My assignment was bringing drafted players for our TV interviews. That's when I met Phil, and he invited me to camp. I didn't think it was real. 'I'll believe it when I get the letter,' I thought. When it came in the mail, it was real. My mom still has that letter with everything else she's kept -- all my fan mail, in binders. For the memory, I remember stepping on the ice the first time in Tampa Bay for a mini-tournament, two goalies per team, each playing one period in a two-period game, and in my first period I stopped all 14 shots. I was the only one in that game who didn't allow a goal. I remember coming back into my small dressing room, taking my helmet off, looking at myself in the big mirror and saying, 'Wow, I can't believe that my first time on the ice with NHL players I didn't allow a goal.' Phil said at the press conference, 'The way she played, you may see her in an exhibition game.' And sure enough …"

Is there one NHL goalie who most impresses you for his variety of tools and the way he plays the game?

"It's hard to pick one, but a goalie I really like who's a great skater, reads the play and can play the puck is [Montreal Canadiens goalie] Carey Price. In the playoffs just past, he looked so calm out there. He has a way of reading the play. You have some goalies who are more about blocking the puck, who will be hit by it, and others who are really reading what's in front of them and can play the puck. Someone who can do that can make a big difference. I'm having so much fun watching Dylan, who's living a bit what I felt as a smaller goalie. He was one of the smallest goalies in the U.S. [National Team] Development Program (he's listed by Notre Dame as 5-foot-8, 167 pounds) but he could skate, play the puck and read the play. I saw what he had to overcome because of his size. Then I see a guy like Carey, who has all of that but is a good size, and that's why he's a really solid NHL goalie."

Women's hockey has grown enormously during your lifetime. How gratifying has that been, and what's your hope for the women's game in the present and future?

"It's been amazing to see how far women's hockey has come since I played my first world championship in 1992 and the first Winter Olympics at Nagano (Japan) in 1998. The women today are amazing athletes. It would be great to have one professional league and not [two] leagues competing against each other. One that has the support of the NHL and NHL teams, the same way that the WNBA has the support of the NBA and its teams. I think the women's game could have a very successful professional league."