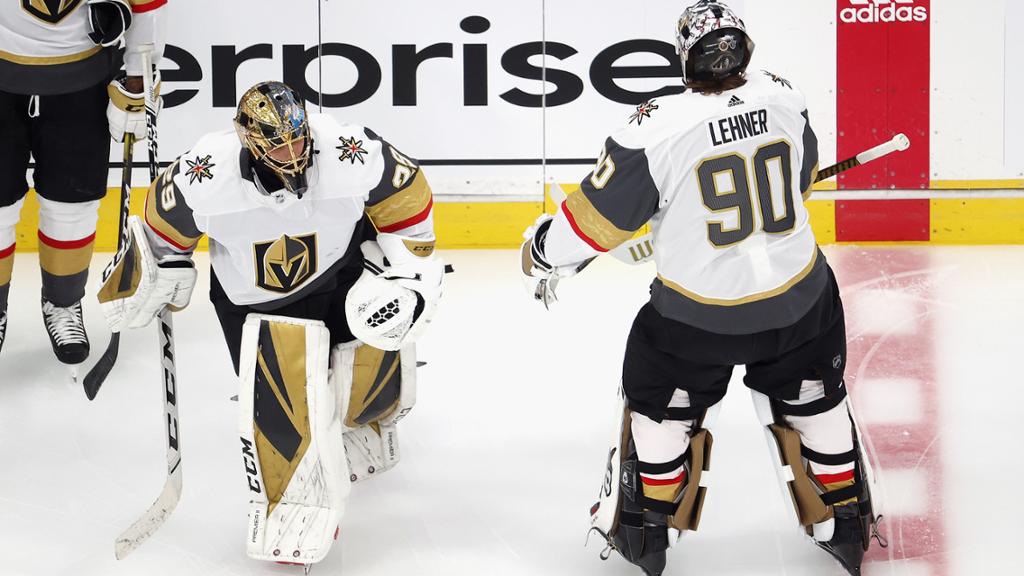 NHL.com has the fantasy hockey spins on notable signings, trades and news during the 2021 offseason. For more fantasy coverage, visit NHL.com/Fantasy and subscribe for free to the NHL Fantasy on Ice podcast.

The Chicago Blackhawks acquired elite fantasy goalie Marc-Andre Fleury from the Vegas Golden Knights on Tuesday, and the veteran confirmed he will join the Blackhawks in a video posted on their Twitter account Sunday. Fleury, who won the Vezina Trophy as top goalie in the NHL last season, remains among the 10 best fantasy players (seventh) at the position and top 50 overall for this season after the move.

Fleury is entering the final season of his contract (potential 2022 unrestricted free agent) and loses some fantasy appeal going to the Blackhawks, whose defense is inferior to the Golden Knights. But most Chicago skaters will get a boost from playing in front of Fleury, and the trade for valuable defenseman Seth Jones on July 23 should help the veteran goalie maintain his NHL career consistency as a valuable fantasy option.

Since joining Vegas in 2017, Fleury ranks third in NHL wins (117) behind Andrei Vasilevskiy (149) of the Tampa Bay Lightning and Connor Hellebuyck (133) of the Winnipeg Jets and leads the League with 23 shutouts over the span. Among the 20 goalies who have played at least 150 games over that span, Fleury is tied for fifth with a .917 save percentage.

Elite right wing Patrick Kane, valuable forwards Alex DeBrincat, Dominik Kubalik, Kirby Dach and Jonathan Toews each have gained fantasy value from Chicago improving its supporting cast with Fleury and Jones this offseason. Goalie Kevin Lankinen, who will likely take a back seat to Fleury as the 1B or backup goalie, remains among the top 20 rankings at the position.

Robin Lehner, now the Golden Knights' clear starter after the Fleury trade, has risen to No. 2 in NHL.com's fantasy goalie rankings behind Vasilevskiy and just ahead of Darcy Kuemper (acquired by Colorado Avalanche from Arizona Coyotes on Wednesday to replace Philipp Grubauer, who signed with Seattle Kraken). Lehner, who had a slightly better SV% than Fleury over the past four seasons combined (.918), is a top 25 overall fantasy player and worth targeting in the second round of a standard draft from the safest team in the Pacific Division.

NHL.com has the fantasy hockey spins on the biggest free agent signings from July 28 for the 2021-22 season.

Kuemper was traded to the Colorado Avalanche by the Arizona Coyotes on July 28 and has skyrocketed in the fantasy rankings as a result. Kuemper is now among the three best options at the position after Philipp Grubauer left the Avalanche to sign with the Seattle Kraken in free agency; the only two goalies ahead of Kuemper in NHL.com's fantasy rankings are Andrei Vasilevskiy (Tampa Bay Lightning) and Robin Lehner (Vegas Golden Knights; after Marc-Andre Fleury trade).

With Kuemper already solidifying himself as a consistent fantasy option when healthy over the past four seasons (tied for best save percentage, .921, among goalies who played each of those seasons), he now has the team support to get more recognition as one of the NHL's best goalies. Kuemper was 10-11-3 with a .907 SV% and two shutouts in 27 games last season but should play closer to his elite peripherals from two seasons ago upon joining the Avalanche; he was 16-11-2 with a .928 SV% in 29 games for Arizona in 2019-20, leading the Coyotes to a Stanley Cup Playoff series win for the first time since 2011-12.

Although Kuemper has a chance to offset Grubauer's departure, it's worth noting Kuemper has missed time because of injuries in recent seasons and could also find himself in a timeshare with Pavel Francouz, a quality backup to Grubauer two seasons ago who missed all of last season with a lower-body injury. That said, Kuemper should be worth the risk with a chance to be among the wins-per-game leaders in the NHL and is worth targeting among the top 25-30 overall players in standard 12-team leagues.

NHL.com has the fantasy hockey reaction to the top 2021 NHL Draft picks and biggest trades from July 23-24.

Nedeljkovic was traded to the Red Wings by the Carolina Hurricanes on July 22, losing fantasy value for this season. But although Nedeljkovic has dropped out of the top 25 goalie rankings with the move to rebuilding Detroit, he still has sneaky fantasy upside in keeper and dynasty leagues.

Nedeljkovic was 15-5-3 with a .932 save percentage (led NHL; minimum 20 games) and three shutouts in 23 regular-season games and 4-5 with a .920 SV% and one shutout in nine Stanley Cup Playoff games last season, emerging as the starter for the Hurricanes and finishing as a finalist for the Calder Trophy (top rookie).

Nedeljkovic should see an increased start volume with the Red Wings without the competition he had in Carolina from Petr Mrazek and James Reimer, but the goalie's peripherals will likely decline playing behind Detroit's inexperienced defense and top-heavy forward group, led by center Dylan Larkin and wing Jakub Vrana. Nedeljkovic's outlook within the scope of his position remains promising in long-term leagues, but he's now a late-round sleeper worth targeting anytime outside the top 150 overall as a depth fantasy goalie in a standard draft.

NHL.com identifies the most valuable players in fantasy hockey for this season who were selected by the Seattle Kraken in the 2021 NHL Expansion Draft.

Ellis was traded to the Flyers by the Nashville Predators on July 17, boosting his fantasy outlook for this season. Ellis is now among NHL.com's top 150 overall fantasy rankings after the move and gives the Flyers two defensemen among the top 30 at the position, joining new teammate Ivan Provorov.

A well-rounded defenseman, Ellis ranks 27th at the position in points (199 points in 360 games) and fourth in plus/minus (plus-94) since 2015-16. He scored 18 points (five goals, 13 assists) in 35 games and five points (one goal, four assists) in six postseason games for the Predators last season. Although Provorov has been relevant in fantasy with 62 points (20 goals, 42 assists) in his past 125 games over the past two seasons, the Flyers haven't had an elite offensive defenseman since Shayne Gostisbehere scored 65 points (13 goals, 52 assists) in 78 games during the 2017-18 season.

Ellis has scored at least 38 points three times in his NHL career as Nashville's No. 2 fantasy defenseman behind elite option Roman Josi and has a high fantasy ceiling in a top-pair role at even strength and especially if he plays on Philadelphia's first power-play unit. The Ellis trade, along with a separate move to land Rasmus Ristolainen from the Buffalo Sabres on July 23, also boosts the fantasy bounce-back appeal of young goalie Carter Hart, who took a big step back last season (.877 save percentage in 27 games; .915 in 74 games over first two NHL seasons) largely because of the Flyers' defensive struggles.

Arvidsson was traded to the Kings by the Nashville Predators on July 1, giving him renewed upside to return to his prior fantasy relevance. Arvidsson, still in his prime at 28 years old, will likely be a fixture in the Kings' top six and could get a trial on the top line with elite center Anze Kopitar if veteran wing Dustin Brown or Alex Iafallo moves down the lineup.

Even if Arvidsson plays on the second line with center Phillip Danault, Arvidsson brings fantasy intrigue than he had recently with the Predators, who were 22nd in goals per game (2.70) last season. He scored 61 points in consecutive seasons (2016-18) before scoring an NHL career-high 34 goals in 58 games in 2018-19. Arvidsson has also been valuable for shots on goal with at least 246 in 2016-17 and 2017-18, and his NHL career-high nine power-play points could easily be exceeded with consistent exposure to Kopitar and valuable defenseman Drew Doughty on the top power-play unit. He is among NHL.com's top 10 fantasy bounce-back candidates for this season.

Podkolzin, the No. 10 pick in the 2019 NHL Draft, signed a three-year, entry-level contract with the Canucks on May 30. He's among NHL.com's top 100 rankings for keeper and dynasty leagues and could play right wing in Vancouver's top six as early as this season on a line with valuable center Elias Pettersson or Bo Horvat.