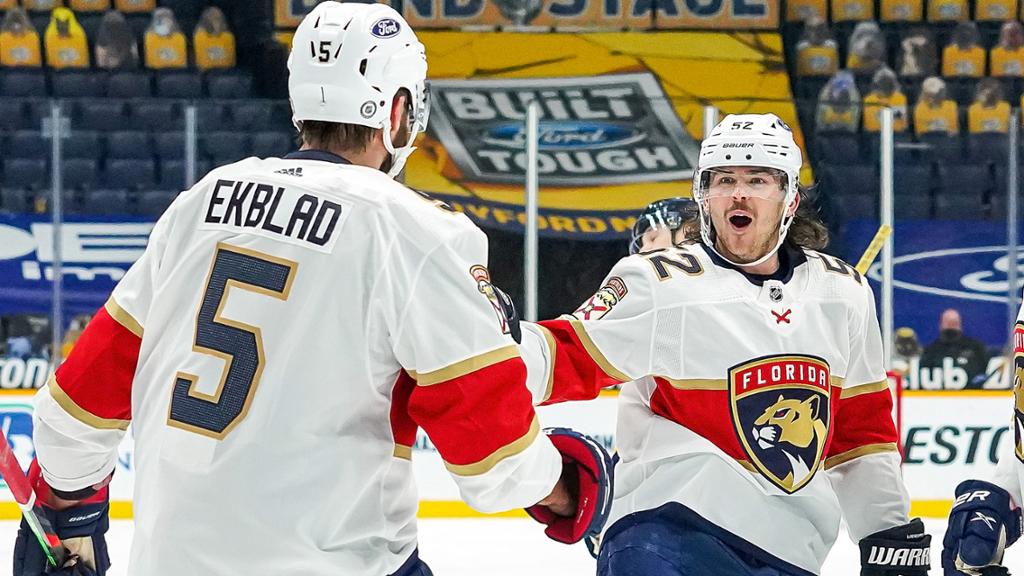 NHL.com identifies the top 10 fantasy hockey sleeper candidates for the 2021-22 season. For more fantasy coverage, visit NHL.com/Fantasy and subscribe for free to the NHL Fantasy on Ice podcast.

NOTE: Sleepers are players taken in the later rounds who can vastly outperform their average draft position. They can be young players who have scratched the surface or more experienced ones who remain underrated or overlooked in fantasy for any reason(s). These picks are a collaborative effort by Pete Jensen and Rob Reese.

Weegar remains underrated in fantasy after leading NHL defensemen in even-strength points (31) last season despite losing his elite Florida Panthers pair Aaron Ekblad to a season-ending leg injury on March 28. Weegar played an expanded role in Ekblad's absence and was a fantasy standout with 17 points (four goals, 13 assists) in 19 games and impressive category coverage (plus-17, 41 shots on goal, 39 hits) in 21:57 per game during the span. Weegar can maintain or even expand on his fantasy success with Ekblad expected to be ready for training camp, the rise of rookie goalie Spencer Knight and Florida's addition of goal-scoring forward Sam Reinhart (acquired from Sabres).

Hyman is coming off the highest points-per-game average (0.77) of his six NHL seasons for the Toronto Maple Leafs and has even more fantasy appeal after signing a seven-year contract with the Edmonton Oilers. He will likely play on one of the first two lines with exposure to one of the top five fantasy players in either center Connor McDavid (led NHL with 105 points in 56 games last season) or Leon Draisaitl (second in League with 84 points). Hyman, mostly an even-strength scorer for Toronto, has untapped potential if he lands a first power-play role with the Oilers and brings strong hits coverage (1.4 per game in NHL career).

He was one of the most valuable rookies at the position last season with the Washington Capitals; he was 21-10-4 with a .908 SV% and two shutouts in 37 games. Vanecek had the most wins and was tied for the most games played among rookies with Kevin Lankinen (17 wins) of the Chicago Blackhawks. Vanecek, part of a timeshare in Washington last season when Ilya Samsonov was healthy, is a coveted fantasy goalie option in keeper and dynasty leagues but could be overlooked in standard formats with Samsonov ranked much higher.

Spurgeon sparked the Wild's power play down the stretch last season, scoring 19 points (T-6th at position in span) and nine power-play points (T-3rd) over his final 26 games. Minnesota's power play ranked third in the NHL (29.6 percent) over that span compared to worst in the League (8.5 percent) from the start of the season to March 21. After Ryan Suter's contract was bought out this offseason (signed with Dallas Stars), Spurgeon should be Minnesota's clear No. 1 fantasy D-man and a fixture among the top 30 rankings at the position this season.

Garland, acquired by the Vancouver Canucks on July 23, gained fantasy value with likely exposure to either valuable center Elias Pettersson or Bo Horvat. Garland scored 39 points (12 goals, 27 assists) in 49 games for the Arizona Coyotes last season, the best points-per-game average (0.79) of his NHL career, and could have a higher gear for a much better offensive team in the Canucks. Garland's production with the Coyotes was impressive considering they ranked 27th in goals per game (2.64) over the past three seasons combined. He's worth drafting ahead of young wings Nils Hoglander and Vasily Podkolzin and can finish among the top 100 overall.

Carolina's fantasy replacement for elite defenseman Dougie Hamilton (signed with New Jersey Devils) could be DeAngelo, whose contract was bought out by the New York Rangers before he signed a one-year contract with the Hurricanes on July 28. DeAngelo was one of the most valuable players at the position in 2019-20, scoring 53 points (T-5th), 19 on the power play (T-9th), in 68 games that season on the Rangers' first unit with elite forwards Artemi Panarin and Mika Zibanejad and has rejoined the fantasy top 50 defensemen with exposure to elite Hurricanes forwards Sebastian Aho and Andrei Svechnikov.

Batherson's 17 goals were tied for second on the Ottawa Senators with elite left wing Brady Tkachuk and center Josh Norris behind right wing Connor Brown's 21. Batherson, who's only 23 years old, proved he'll be one of the building blocks for the Senators, and his ceiling is even higher with top line and first power-play unit exposure to Tkachuk and Norris over a full season. Batherson should be prioritized around the 150 mark in standard 12-team fantasy leagues because of his strong hits coverage (102 in 56 games last season).

He's the top-ranked Seattle Kraken skater in fantasy after being selected from the New York Islanders in the NHL Expansion Draft. Eberle ranks fourth among NHL right wings in goals (241) and fifth at the position in points (551 in 779 games) since entering the League in 2010-11. He combined to score 73 points (32 goals, 41 assists) in 113 games over the past two regular seasons, fourth on the Islanders in the span playing on mostly the top line with center Mathew Barzal. Eberle goes from a defensive system under Islanders coach Barry Trotz to one where he will be the featured offensive player, meaning he could have a high ceiling again (scored NHL career-high 76 points with Edmonton Oilers in 2011-12).

Petersen is a potential beneficiary of the Kings' offseason moves, most notably the addition of two-way forwards Phillip Danault, Viktor Arvidsson and defenseman Alexander Edler. Petersen, who has challenged veteran Jonathan Quick for playing time at different points during each of the past three seasons, has a .916 save percentage in 54 NHL games, much better than Quick in the span (.896 in 110 games). Petersen is a deep fantasy sleeper for Los Angeles, a potential surprise playoff team in the Pacific Division.

The Philadelphia Flyers forward quietly led them in goals last season (20 in 55 games) and was also among their top five in points (38; fifth) and shots on goal (122; fourth). He excelled regardless of lineup placement and showed flashes of his high offensive ceiling with 10 multipoint games, including three games with at least three points. Farabee, who's only 21 years old, could be a late-round steal from a potential bounce-back fantasy team in the Flyers.