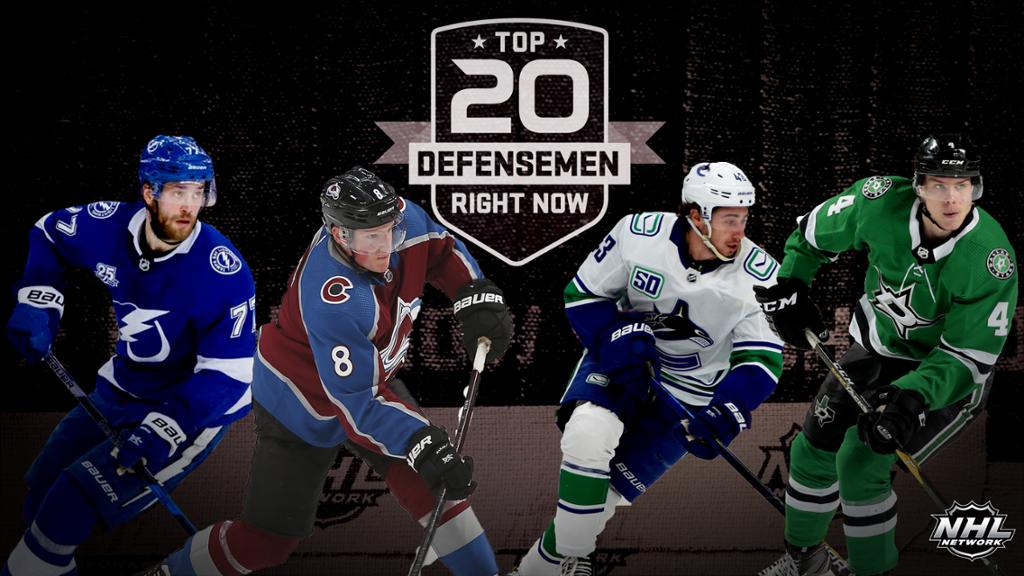 Whether it's breaking up a big play, setting up a goal, or scoring on the power play, some defensemen can do it all. NHL Network producers and analysts chose the top 20 defensemen in the League right now, and they were revealed Sunday in the first of a nine-part series. Here is the list:

Ellis scored 38 points (eight goals, 30 assists), three from matching his NHL career high despite being limited to 49 games because of injury and the regular season being paused and ultimately cut short due to concerns surrounding the coronavirus. He was plus-16 and ranked second on the Predators in ice time per game (23:30) behind Roman Josi (25:47) and third in blocked shots (96). Ellis has scored at least 32 points each of the past five seasons.

"Ryan Ellis has been that steady presence, both ends of the rink," NHL Network analyst Ken Daneyko said. "Especially if you're a guy his size (5-foot-10, 180 pounds), he's not the biggest of stature, you have to have a high compete level and he has an extremely high compete level. …He's a guy that continues to be a steady force for the Nashville Predators."

Karlsson led the Sharks with 40 points (six goals, 34 assists) in 56 games through Feb. 14 before missing the remainder of the season with a broken thumb. He was second on San Jose in ice time per game (24:31) behind Brent Burns (25:25). Karlsson scored at least 62 points in five straight seasons for the Ottawa Senators from 2013-18, and his 603 points since entering the NHL in 2009-10 are the most among defensemen in that span. He is a four-time Norris Trophy finalist and was voted winner of the award for best NHL defenseman in 2012 and 2015.

Slavin set NHL career highs in assists (30) and points (36) in 68 games last season, when he led the Hurricanes in ice time per game (23:24) and blocked shots (107). He led the NHL with 81 takeaways and was tied for second with a plus-30 rating. Slavin ranked sixth in the NHL in shorthanded ice time (210:55) last season and has scored at least 30 points in four straight seasons.

Video: Shea Weber once more on the Top 20 Defensemen list

Doughty was second in the NHL in average ice time last season (25:49 per game) and has finished third or better in the NHL each of the past six seasons. He scored 35 points (seven goals, 28 assists) in 67 games, the 10th time in 12 NHL seasons he's scored at least 30. Doughty is a four-time Norris finalist, winning the award in 2016, and played in 460 straight games before missing a 4-2 loss to the Tampa Bay Lightning on Jan. 29. He has missed 19 games in his NHL career.

"He kind of had his coming out party this season and going into the playoffs, he had a terrific playoffs as well, he's going to be in the top-10 sooner than later," Daneyko said. "…We knew he had all the ability, the skating, the shot, but it's about reading plays on the ice, when to jump in, when not to."

Werenski set an NHL career high and a Blue Jackets record for goals by a defenseman with 20, the most in the League at the position, and was on pace for a career high in points before the season was paused. He scored 41 points, 13 power-play points (five goals, eight assists) and four game-winning goals, and was second on the Blue Jackets in ice time per game (23:59), the third straight season he's increased his average.

The runner-up for the Calder Trophy as NHL rookie of the year last season, Hughes led NHL rookies in assists (45), points (53) and power-play points (25; three goals, 22 assists) in 68 games, and his 21:53 of ice time per game was second (defenseman Ethan Bear, Edmonton Oilers, 21:58). Hughes helped the Canucks reach the Stanley Cup Playoffs for the first time since 2014-15 and scored 16 points (two goals, 14 assists) in 17 postseason games.

Heiskanen scored 35 points (eight goals, 27 assists) in 68 regular-season games, was plus-14, and averaged 23:46 of ice time per game to lead Dallas. In the postseason, he set a record for points by a Stars defenseman with 26 (six goals, 20 assists), including eight on the power play (two goals, six assists), and was plus-8 in 27 games averaging 25:58 of ice time.

"He has a Norris Trophy in his future, there is no question in my mind that Miro Heiskanen will win it one year," Daneyko said. "He just continues to get better and better. He adjusts to however his team is playing. … As smooth a skating as you're going to see. …Nobody is smoother than Heiskanen, he's like silk."

Hamilton ranked fourth among NHL defensemen with 40 points and was tied for second with 14 goals when he broke his fibula Jan. 16, causing him to miss the remainder of the regular season. His plus-30 rating was second in the NHL at the time. Hamilton, who is first among NHL defensemen with 49 goals over the past three seasons, returned for the Eastern Conference First Round against the Boston Bruins and scored two points (one goal, one assist) in a five-game loss.

Makar, who won the Calder Trophy last season, led NHL rookie defensemen in goals (12), power-play goals (four) and even-strength goals (eight), and he was second to Hughes among NHL rookies in assists (38), points (50) and power-play points (19; four goals, 15 assists). He scored four game-winning goals, had a plus-12 rating, and averaged 21:01 of ice time in 57 games, third among rookies. Makar, who set the Avalanche/Quebec Nordiques record for points by a rookie defenseman in one season, scored 15 points (four goals, 11 assists) in 15 postseason games.

"He's Victor Hedman 2.0 to me, as far as, he continues to get better, he's 6-foot-4, so has that big frame like Victor Hedman," Daneyko said. "He uses his body well, he's physical, I think his offensive ability will continue to grow over the next few seasons. Again, powerful skater, long stride, joins the attack, uses his stick so well around his net. He defends so well."

Pietrangelo scored an NHL career-high 16 goals in 70 games for the St. Louis Blues last season, and his 52 points were two shy of his high, set in 2017-18. He also set NHL career highs in power-play points (22; six goals, 16 assists) and shots on goal (225) playing a St. Louis-leading average of 24:11 per game. Pietrangelo, who was Blues captain from 2016-2020, helped them to the best points percentage in the Western Conference (.662) after leading NHL defensemen with 19 points (three goals, 16 assists) in 26 games in the 2019 playoffs, when St. Louis won the Stanley Cup for the first time in its history. He scored six points (one goal, five assists) in nine games in the 2020 postseason before signing a seven-year contract with the Golden Knights on Oct. 12.

"John Carlson quarterbacks the power play, he is a master back there at finding the open man or taking that big shot and burying it," Daneyko said. " … I would have had no problem with John Carlson - for the season he had - giving him the Norris Trophy, at all, and he finished second. He had that good of a year."

"I don't think we're going to get any argument having Roman Josi at number two, as the best defenseman," Daneyko said. "… He just eats, sleeps and breaths hockey. He wants to be the best he can be for his teammates and what makes him so impressive is he's hard to track, hard to defend, because he's always in motion with that beautiful fluid skating stride."

"[Hedman is] 6-foot-6, agile, mobile, great reach, great shot, reads the play well, physical," Daneyko said. "He has all those attributes, so that's why he is the best defenseman in the National Hockey League. He always makes the right play. We talked about how good he was in the Playoffs and rightfully so won the Conn Smythe Trophy and well-deserved championship with the Tampa Bay Lightning."