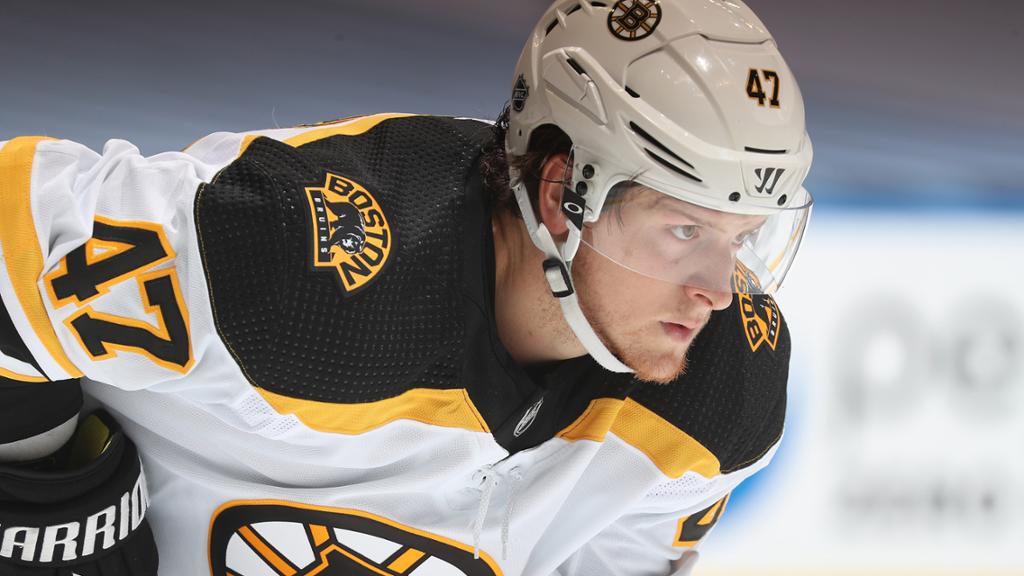 After the NHL Draft, free agency and other offseason moves, NHL.com is examining where each team stands in preparation for the 2020-21 regular season, which is targeted to start Jan. 1. Today, the St. Louis Blues:

The St. Louis Blues made a major change at defenseman, agreeing with Torey Krug on a seven-year contract Oct. 9 and not re-signing captain Alex Pietrangelo.

"At his size (5-foot-9, 186 pounds), he has to defend with his head, with his stick, with his quickness," general manager Doug Armstrong said of Krug, who played for the Boston Bruins since entering the NHL as an undrafted free agent late in the 2011-2012 season. "He plays to his strengths, but he's not a passive player by any stretch. But his quickness is important for us. He gets back, retrieves pucks, makes an excellent first pass out of the zone."

Krug also should add to a power play that ranked third in the NHL last season (24.3 percent); 160 of his 337 NHL points have come with the man-advantage.

"It's not a secret it's a strength of mine," Krug said. "I enjoy doing it. I take a lot of pride in making sure our team can feed off the energy of a power play, if we're not scoring a goal or gaining momentum, and I really enjoy playing a big role in that."

After trading goalie Jake Allen to the Montreal Canadiens on Sept. 2, St. Louis will turn to Ville Husso to back up Jordan Binnington. The 25-year-old, selected by the Blues in the fourth round (No. 94) of the 2014 NHL Draft, was 16-17-8 with a 2.56 goals-against average, a .909 save percentage and four shutouts in 42 games for San Antonio of the American Hockey League last season.

"Ville Husso is a player we've had high hopes for, and we believe has earned the right to compete for an NHL job," Armstrong said. "To do that, you need to create opportunity."

Torey Krug, D: The 29-year-old scored 49 points (nine goals, 40 assists) in 61 games for the Bruins last season, including 28 power-play points (two goals, 26 assists). … Kyle Clifford, F: The 29-year-old signed a two-year contract Oct. 11. He scored 17 points (seven goals, 10 assists) in 69 games for the Toronto Maple Leafs and Los Angeles Kings last season. ... Jim Montgomery, assistant coach: Hired on Sept. 16, he was fired as coach of the Dallas Stars on Dec. 10 due to unprofessional conduct. Montgomery later said he was receiving counseling for alcohol abuse and checked himself into an in-patient residential program.

Video: NHL Tonight takes a look at the Blues offseason

Klim Kostin, F: The 21-year-old center scored one goal in four games for the Blues last season and 30 points (13 goals, 17 assists) in 48 games for San Antonio of the AHL. … Austin Poganski, F: The 24-year-old right wing, who played one game for St. Louis last season, scored 30 points (10 goals, 20 assists) in 56 AHL games. … Niko Mikkola, D: The 24-year-old had one assist in five games for the Blues and scored 14 points (two goals, 12 assists) in 48 AHL games. … Scott Perunovich, D: The 22-year-old scored 105 points (20 goals, 85 assists) in 115 games in three seasons at the University of Minnesota Duluth and won the Hobey Baker Award as the top player in NCAA Division I hockey last season.

To replace the production of forward Vladimir Tarasenko, who had shoulder surgery in September. He will be reevaluated five months from the date of surgery and is expected to miss the start of the season, which the NHL has targeted for Jan. 1, 2021. Tarasenko also had shoulder surgery in October 2019 and was limited to 10 games in the regular season and four in the postseason.

Binnington was 30-13-7 with a .912 save percentage and three shutouts in 50 games last season. It was a significant decline from his .927 save percentage as a rookie in 2018-19, when he had 24 wins in 32 games (30 starts). Despite his struggles during the postseason (0-5-0, .851 save percentage) and Pietrangelo leaving, Binnington is a true No. 1 option after Allen was traded. Binnington is a high-volume starter and should have plenty of goal support after the signing of Krug, making each player worth a selection among the first 10 at his position.  -- Rob Reese