Lightning could turn to rookie Foote to bolster defenseman group

No. 14 pick in 2017 NHL Draft expected to get chance after Shattenkirk, Bogosian depart 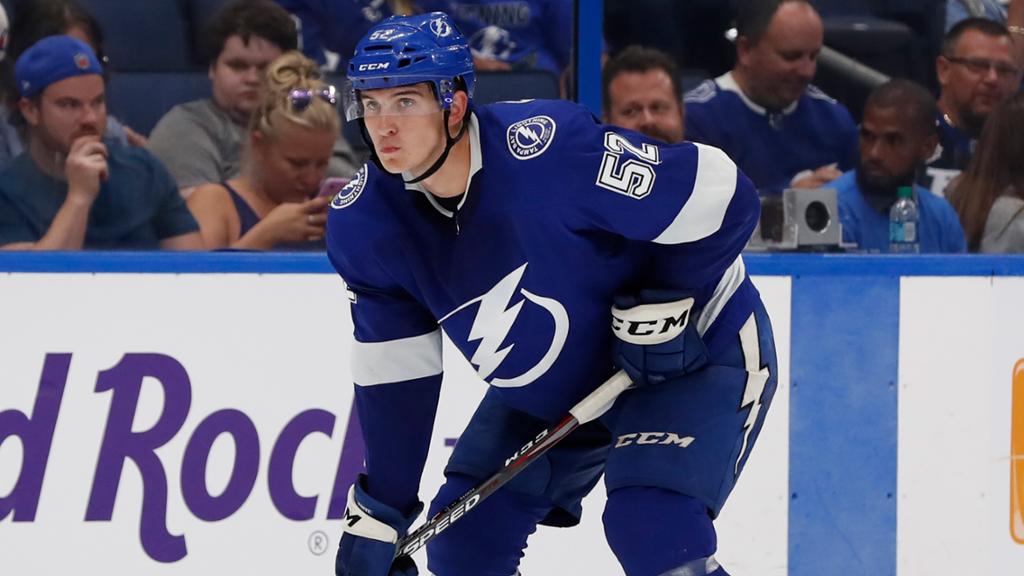 After the NHL Draft, free agency and other offseason moves, NHL.com is examining where each team stands in preparation for the 2020-21 regular season, which is targeted to start Jan. 1. Today, the Tampa Bay Lightning:

The Tampa Bay Lightning hope a little help from within will go a long way in sustaining success after winning their second Stanley Cup championship in 16 seasons.

Defenseman prospect Callan Foote could be a key part of that transitional process if he can emerge from training camp in a top-four role following the departure of defensemen Kevin Shattenkirk and Zach Bogosian as free agents last month.

Foote (6-foot-4, 220 pounds) was the No. 14 pick in the 2017 NHL Draft and has the look and pedigree, being the son of former NHL defenseman Adam Foote. He scored 28 points (six goals, 22 assists) in 62 games last season for Syracuse of the American Hockey League, his second full season as a pro.

The 21-year-old was the only defenseman with no NHL experience on Tampa Bay's 33-player roster to begin Phase 3 of the NHL Return to Play Plan in July.

"It's good for us guys from the AHL to show coaches how far we've come," Foote said. "The biggest thing for me is improving my skating, quick feet, and that's come a long way. It's been a good year for me [in Syracuse] to get more physical, closing guys out. This was a huge challenge. There are bigger, stronger, faster guys up in the NHL."

They placed forward Tyler Johnson on waivers Oct. 9, allowing any NHL team to claim his contract that has four years left on a seven-year contract he signed in July 2017. The 30-year-old forward passed through without a claim. He has given Tampa Bay a list of eight teams he would agree to be traded.

To re-sign restricted free agent forward Anthony Cirelli and defensemen Mikhail Sergachev and Erik Cernak, and for at least one forward prospect to emerge during training camp because Tampa Bay may be forced to trade at least one veteran to conform with the NHL salary cap ($81.5 million). Barre-Boulet, an undrafted forward, could be that player. He scored 116 points (53 goals, 63 assists) for Blainville-Boisbriand in his final season in the Quebec Major Junior Hockey League in 2017-18 before playing the past two seasons for Syracuse, scoring 124 points (61 goals, 63 assists) in 134 AHL games.

Video: The offseason outlook of the Tampa Bay Lightning

The injury status of elite forward Steven Stamkos has implications on the fantasy appeal of the defending Stanley Cup champions. If Stamkos is ready for the start of the season, he would either rejoin the top line with top 10 overall fantasy assets Brayden Point and Nikita Kucherov, or he would play wing on the second line, boosting the sleeper appeal of forwards Cirelli and Alex Killorn. The latter scenario would mean strong category coverage for left wing Ondrej Palat, who was a top 75 overall fantasy player last season, highlighted by his 145 hits (T-13th at position). Palat thrived with Point and Kucherov in the postseason during Stamkos' extended absence, scoring 11 goals (second on Tampa Bay behind Point's 14). -- Pete Jensen